It’s that time of year when bicyclists and extra traffic share Island roadways. It’s always a good idea for motorists and bicyclists to use some courtesy and common sense when traveling through Grand Isle County and Vermont in the summer months. Drivers have to be patient and bikers should stay single file at the side of the road, except in places like the drawbridge where bicycles and motorists can merge.
When you have to be patient dealing with your fellow travelers, it’s always a good time to take a deep breath and look around and remember that you’re very lucky to be on the road in paradise.

With gorgeous views in almost every direction, the Islands are a great place to get out a bike and go for a ride.
Below are several self-guided tours perfect for cyclists.
Map of the Routes
A Legacy of Ancient Stone:  Isle La Motte  --  13.4 miles
Following the perimeter of the Island, terrain is flat along a combination of paved and unpaved roads, all in good condition and all quiet. Traffic is minimal, in fact the loop is recommended for families. The recommended start/end point is St. Anne’s Shrine on the west shore. Here, cyclists are welcome to visit the peaceful grounds or swim at the shrine’s sandy beach. Food, public restrooms, picnic tables, and parking are also available at the shrine. Provisions are also available at a nearby store. Lodging is available at bed and breakfasts along the route .

Island Life: Grand Isle -- 11.6 miles
Highlighting both the area’s history and natural resources, Island Life is a 12-mile tour through the heart of the Islands.  Stop by the Hyde Log Cabin, one of the oldest remaining log cabins in the United States.  Relax at the Grand Isle State Park. Take a swim, share a picnic or walk an interpretive trail to an observation platform with unbelievably beautiful views of the inland sea, Mount Mansfield and the Green Mountain Range. 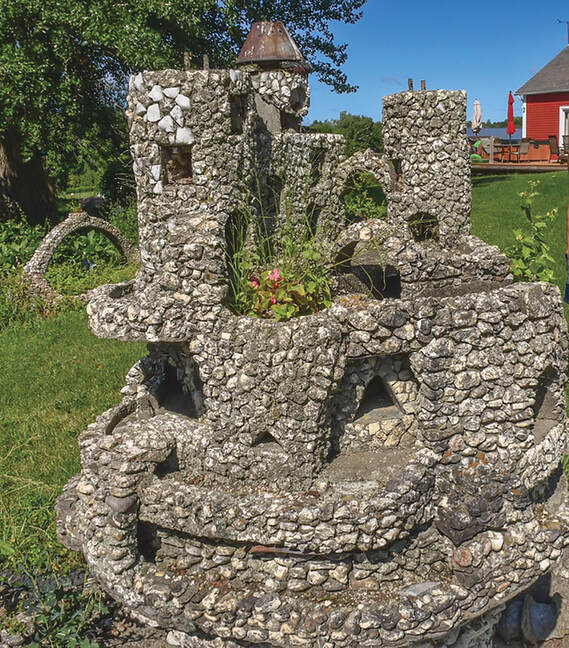 Stone Castle at Crescent Bay Bed & Breakfast located in South Hero. Photo by ROB SWANSON
​​Stone Castles begins at the Grand Isle Ferry dock.  Tour South Hero on this 13-½ mile loop, where gardener Harry Barber created numerous miniature buildings from Vermont stone during the late 1920s until his death in 1966.  Today there are only five castles, three houses and several garden structures still in existence.  These wonderful works by Barber are on privately owned land, but can be viewed from the road.  Bring your binoculars to see detail, or to watch some of the abundant wildlife found on the island.

Liquid Elixir - Alburgh -- 11.7 miles
The loop begins your trip in Alburgh Village at the Alburgh Rail Trail. It then follows backcountry paved and unpaved roads through wetland areas. Traffic is minimal and terrain is relatively flat. There are no services along this loop, except in the Village.

A Trail to Two Beaches: Alburgh and North Hero -- 15.8 miles
This relatively flat “figure-8” loop connects two state parks, and may be shortened by riding only one of the circuits. The Alburgh circuit is 5.8 miles and the North Hero circuit is 9.3 miles. Great lake views abound. Traffic is minimal. Sections of the loop are unpaved, but are in good condition and passable with a touring bike with fairly substantial tires. The recommended start/end point is at either Alburgh Dunes State Park or North Hero State Park. Provisions, lodging, and parking are available in the Village of North Hero, just south of the loop on Route 2.